On the battlefields of medieval times, when Knights in Europe were heavily clothed in metal suits of armour and closed helmets, some sort of quick visual identification was needed during battle. As a matter of survival, the Knights needed to wear marks or symbols on the arms of their armour. Some of these symbols were also embroidered on the arms of the Knight’s surcoats, long and flowing garments that were worn over their armour. Hence, “coats of arms.” 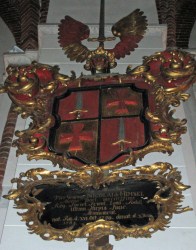 Historically, some form of coats of arms used for military purposes can be dated back to early man, including Greek and African warriors. These people painted their wooden shields with symbols of their heritage.

But the coats of arms of the medieval times of Europe developed into more than just a military ID badge. They grew to represent many things, and just like the number on your Driver’s License, they became unique to each person, or to a family, or even to an entire region. These emblems, used by several social classes, could signify heraldic achievement, or were designed to convey feelings of power and strength. 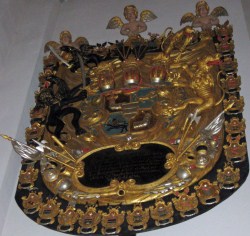 To see the grandeur of these insignias today, after having survived for hundreds of years, is quite extraordinary. I happened upon two unique collections of coats of arms in a couple of churches in Europe. These “quirky” museums were in the St. Peter’s Church of Riga, Latvia and the Tallinn Dome Church of Tallinn, Estonia.

Both of these collections displayed coats of arms that were actually used as epitaphs, a way to preserve the memory of the deceased. The Latvian collection had wooden epitaph coats of arms from the 18th century, with quite colorful baroque and rococo-style wood carvings. The Estonian collection had some very large coats of arms that were eight and a half feet in length, the oldest dating back to 1586. These were painted with heraldic colors, decorated with lush and luxurious ornamentation, and accented with leaf gold and silver, the combination of which resulted in a mother-of-pearl-like glitter. 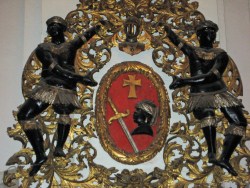 Because the coats of arms were decorated with various pictures, I did a bit of research to find out some of their meanings. For example, birds: an eagle may represent a person of noble nature, or one who is high-spirited; a peacock, beauty, power and knowledge; and a dove, loving constancy and peace. Animals: a lion can symbolize courage; a dragon, a valiant defender of treasure; and a bear, strength, cunning and ferocity in the protection of one’s kindred. Flowers: a rose can characterize hope and joy; a primrose brings good tidings; and a carnation, admiration. 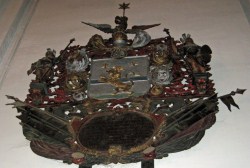 And then certain objects also have significance. Antlers stand for strength and fortitude; a castle for safety; and musical pipes, festivity and rejoicing. A wavy line denotes the sea or water; an indented line is for fire; and an engrailed line, for the earth or land. Even the colors have meaning: gold, generosity; blue, truth and loyalty; and silver, peace and sincerity.

If I could design my own coat of arms, I think it should at least contain a yellow sunflower, which to me represents bright sunshine, the outdoors, strength and happiness.

General historical information about coats of arms from wikipedia

Latvian and Estonian information from the church’s brochures: 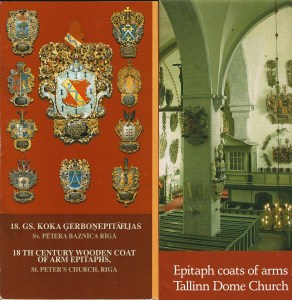 Unless specifically mentioned, all images on my Debby's Departures blog beginning May 2011, as well as on my previous blogs, Tea, Sugar, a Dream beginning October 2007, are my own original photographs and, therefore, copyright protected (©Debby Lee or Debby Lee Jagerman). Feel free to use my images for non-commercial use so long as you provide me with the image credit, and let me know via email. Likewise, feel free to pin my images to Pinterest, but please mention me by name. For other inquiries, contact me at [email protected] Thank you! Sweet Travels! Debby Lee Jagerman