It is a rare occasion that I can be convinced to knowingly participate in an activity that is strictly for “exercise”. Don’t get me wrong I love being active, as long as I don’t realize that is what is happening and I am actually just having fun. Last week on my one day layover in Vancouver I was persuaded to climb a mountain that has been dubbed “nature’s stair-master”. I barely made it up alive, and this is the story. 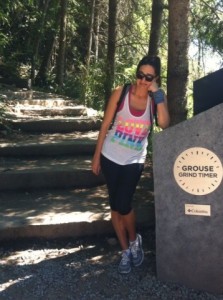 It was a sunny day and after a quick nap post flight, I met up with a friend to plan our day before us. I fortunately get to travel to Vancouver often which is awesome, but it does make coming up with new things to do challenging. My friend mentioned a hike called the Grouse Grind that was close to the city that apparently had amazing views at the top. Not hard to believe as Vancouver is a city that is not short of spectacular views.

We went back and forth for awhile mainly me giving off excuses as to why I didn’t think it was a good idea. Nervous Hiker Syndrome is a thing right? She didn’t think so, and about an hour later we were on the free shuttle towards the base of the hike.

I started off with a steady pace but within 10 minutes my lack of fitness caught up to me. I was huffing and puffing while others around me hadn’t even broken a sweat. This was not a good sign. People were not exaggerating when comparing this hike to the gruelling workout of a stair master. I kept pushing up stopping on average every 1 minute to disguise my tears as sweat beads. My friend had already given up on me and my frequent breaks. I was left to create a pity party with the other stragglers which involved a lot of pushing each other off the side of the mountain humour. 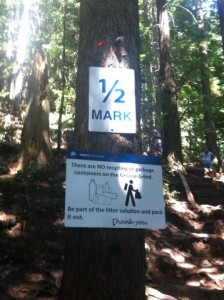 Finally half way there!! At this point feeling in my limbs was lost and I was getting delusional. It could have been the altitude at play, or more realistically it was just me. I’m also pretty sure I performed a very dramatic version of “I dreamed a dream” before continuing up.

When I finally made it to the top I was out of breathe, energy, water and will power. I took the final steps and collapsed to the ground. If I had had more energy I would have punched the man who at that exact moment walked by me bragging how he ran the whole way up.

I have never felt such relief to be done something. I was proud of myself and the feeling of completing something that was such a personal challenge was phenomenal. When my friend asked me if I would do it again I almost even responded yes. But the memories of me climbing played like a montage in my head. The pain, loss of breathe, secret tears and not so secret disdain on strangers faces as I sang Les Miserables, could not be forgotten. 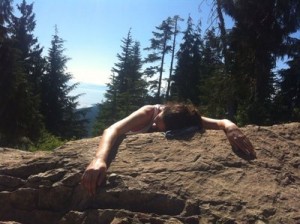 No, I would not do it again. But it made for a great story!