Like millions of people all over the world, I was obsessed this year with the World Cup. Some might even say I had football fever. I would watch every game I could, and be glued to my app for the rest of them.

A couple weeks ago, a few days before the semi finals began, I was watching a cartoon game intro featuring a little boy running around Rio de Janeiro, and decided I needed to go. Simple as that! There was no back and forth contemplating whether or not it was really a good idea. I just committed. I called a couple of my friends that have been known to follow me along on rash decisions and a few hours later we were planning our trip. 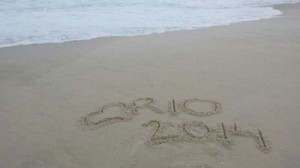 It’s not exactly easy planning a trip so last minute. There were more than a couple obstacles in our way. First one was getting a visa. I looked online and found out exactly what I needed and how I would go about making a special request. Normally these take about 10 business days to process but after begging the consulate and explaining our situation, we got one processed in 2 business days. Task number one – complete!

The next obstacle was finding a place to stay so last minute in a city hosting a major world event. I started off by asking friends and colleagues for advice and suggestions. Secretly hoping that someone would have a grandma that would house us, but no luck there. We moved on to scouring all the hotel and hostel websites and found absolutely nothing. Seriously, NOTHING. Everything was either sold out or 1000 dollars a night. Our last stop was AIRBNB and after only a couple minutes of searching we located an amazing apartment right near Copacabana beach for only 50 dollars a night. It had great reviews and seemed like a perfect fit for what we needed. 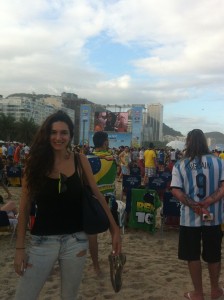 With flights taken care of (thank you my job), a place to stay at night, and a sticker in our passports making sure we didn’t get booted right out upon arrival, we were ready to go! Within 4 days we had conceived the idea, overcome the obstacles and boarded our plane to the World Cup!

I wish I could say that we then proceeded to attend a match in a VIP suite, party with the Brazilian national team and became engaged to Lionel Messi (which I know makes no sense but let me have it). What we did do though was spend 5 amazing days in beautiful Rio, living, breathing and talking endlessly about soccer. That’s a story for another time though.