Home / Daughter / Who says you can’t take it with you?
« Snip snip: first haircut |
Main
| When you wish upon a star » 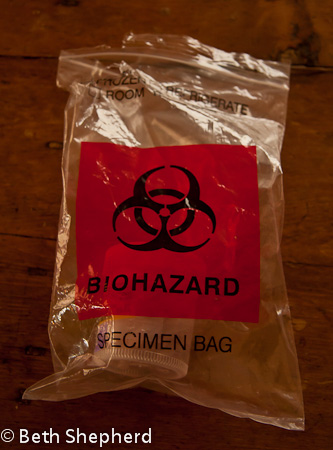 Around the time I was 12, I rode my bike into the front steps of the house across the street, the house where my friend Dee lived. I fell from the bike and my knee hit pavement and gravel. After I limped back to our house, I washed my knee and attempted to get as much of the gravel out as I could.

Flash forward several years: I still had a scar on my knee, a constant reminder of my fall. And, from what I could tell, inside the scar was a small rock. Or at least that’s what I thought.

Decades passed and the scar became a small bump on the front of my patella. It would bother me when I shaved my legs and I’d run my fingers back and forth over the top of it. On occasion, someone would ask me about it and I’d tell them the story of the bicycle accident, the fall, and the rock. No one ever seemed to make much of it, and I wondered if they believed me. I started to question the story I’d told myself, and others, for so many years.

Last year, during a visit to my dermatologist, I relayed the story of the accident and the rock. He laughed, “You don’t think there’s really a rock in there after all that time? It’s probably scar tissue. I’ll inject it with some cortisone and it will shrink.”

So he did. But it didn’t. In fact, from what I could tell, the scar and the bump were getting bigger.

Along came my daughter, who instantly expressed a distinct fascination with the “owie” on my knee. She would look it, and point to it, and as soon as she learned the word “ow,” she would touch my knee and say “OW.”

I made another appointment with my dermatologist. “Don’t you think it’s gotten bigger?” I asked anxiously.

“Maybe,” he replied. “It’s probably scar tissue and I can inject it with some cortisone and it will shrink.”But since you seem concerned, I can also take a biopsy just to make sure it’s not a growth of any sort.”

He sent in his nurse, who injected my knee with a numbing anesthetic.

“You’ve got dense scar tissue. I could barely get the needle in.”

Then the doctor came back. He took out his scalpel, made an incision, and took out a small piece of flesh to biopsy. He was just about to put a couple sutures in my knee, when…

He fished around in my knee for a few seconds. Out came the rock.

“That’s the first time I’ve ever delivered a rock.”

I looked at the tiny gray rock, maybe a quarter-inch long, probably a piece of New York shale.  There was nothing noteworthy about this rock from my home town, except for the fact that it had been in my knee for over forty years.

“I can’t wait to take it home and show my husband.”

“The rock is considered foreign material that is part of the biopsy. If I give you the rock, I have to throw out the biopsy. I can’t send it to the lab without the rock.

“But it’s been in my knee for forty years. I’ve told so many people this story. No one ever seemed to believe me. Now I have proof.”

I was really sad. I wanted my rock. But I also wanted to know the results of the biopsy so I left the dermatologists office…and I left my rock behind.

On the drive home the situation continued to irk me, so when I got back to my house, I immediately picked up the phone and called my doctor’s office. Nurse G., his assistant, answered and was sympathetic when I pleaded: Is there anything you can do? She said she’d try.

Sure enough, Nurse G. contacted the lab, and called me back to tell me that my dermatologist could request to have the rock returned to his patient. She assured me she would submit the request and said the rock would be ready for me to take home at my follow-up appointment. As silly as it may sound, I was elated.

Two weeks passed while I waited. I thought a lot about my hometown, my childhood, the house across the street where my friend Dee lived, one of the closest friends I’ve ever had, a friend who left this world too soon.

I thought about the tales we tell, sometimes over and over, and how we weave a bit of ourselves into our stories. I remembered the jokes my father would share, and the stories too, many of them about his time spent in the Merchant Marine as the ship’s purser and medic, or working on the Al-Can highway. Some of his stories were pretty gruesome and many of the jokes were-–to put it mildly–off-color. I could tell he liked those stories the best, because he would repeat them again and again and again. Of course these are the stories I remember best. And now, when I think about the rock, I get it.

On the day of the appointment, just before the doctor came in to see me, Nurse G. handed over a plastic biohazard bag and my lab report, which read: Scar tissue with foreign body.  Inside the biohazard bag was a plastic specimen jar, and inside the jar was my rock, my rock, a little piece me. 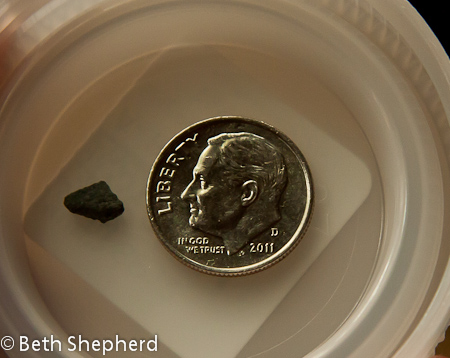