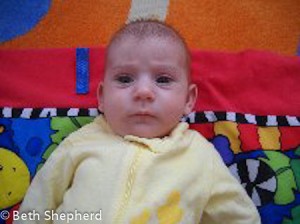 A year ago today, we got “the call,” the call which is the adoption equivalent of two pink stripes on a pee stick. “It’s a girl!” the director of our agency told me. Later in the day, after Big Papa came home, we poured two shots of Armenian brandy, sat down in front of my computer, and opened the files we’d been sent which contained a half dozen photos of a very serious baby girl along with two short video clips.

For most “expectant” adoptive parents, this is the definitive moment in what has been a long and anxious wait. And, for us, you could say it was too, except that it had been a much longer wait, and this wasn’t the first time we’d received the call. In fact you could almost say we were call veterans, since this was the third time in nearly four years, I’d picked up the phone to hear a familiar voice tell me “It’s a..,” and the fourth time we’d sat down to look at photos of a child who lived half the world away, a child who could become our child.

All in all there had been two boys and two girls whose photos we’d seen and whose brief history and medical condition we’d reviewed. Two of these babies we’d flown to Armenia to meet, and now we were told we had an opportunity to fly to meet a third. We had a little over a week to find flights and get ourselves to Armenia, meet this baby, and register our intent to adopt her with the Ministry of Justice in Armenia. Then if all went well, and we received final approval from both our country and hers, in five to six months time we would travel to Armenia, attend court and become her parents.

Of course, being veterans, we now knew that things didn’t always go as planned. In fact if anyone knew how many ways things could go awry, it was us.

Within 24 hours we booked plane tickets. Nine days later we boarded a flight to Paris, and three days after that we flew to Yerevan, Armenia. Three more days after that, we drove–in what was one of the most memorable taxi rides we’ve ever taken–to Gyumri. And it was there, we first set eyes on each other, and began the journey that would change all of our lives.