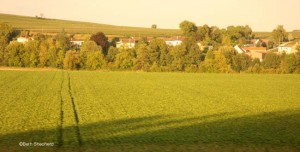 Outside our train window, vine covered slopes stretched out as far as we could see, knitting together small villages with red tiled roofs and wooden shutters. The river Marne gracefully cut a green swath along the edges of this landscape. A more peaceful scene I could hardly imagine which belied the history of fierce World War I battles that took place along the Marne’s banks. 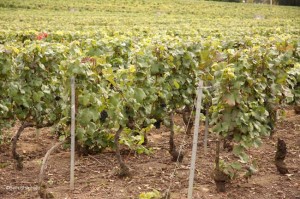 Big Papa and I were heading to Epernay, a small town of 25,000 residents in the heart of the Champagne region of France. Founded back in the 5th century by tanners, Epernay was passed into the hands of the Counts of Champagne in 1024. The town is roughly 88 miles from Paris; our train ride took 45 minutes with a few stops at smaller villages along the way. 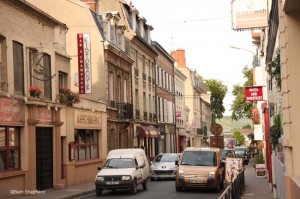 Once there, we moseyed up the appropriately named ‘Avenue de Champagne,’ passing by many of France’s famous champagne “houses”: Moet and Chandon, Castellane, Mercier, and Perrier-Jouet. It was fascinating to imagine that underneath our feet more than 100 kilometers (or over 328,000 feet) of tunnels dug into chalk soil were sheltering millions of bottles of aging champagne. 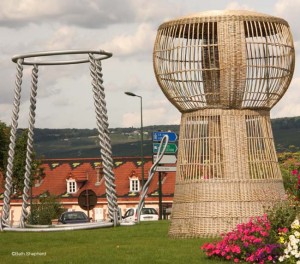 Ah, champagne. I confess I rather like the bubbly and so a chance to tour and taste champagne in Champagne was a pretty big thrill. It is, after all, the wine of celebration. No other wine has quite the same reputation for launching ships or toasting weddings. Its meaning is universal.

As wines go, champagne – as we know it – is a relatively recent “invention.” Before the mid-1600s there was no fizzy champagne. The only wines made were “still wines.” 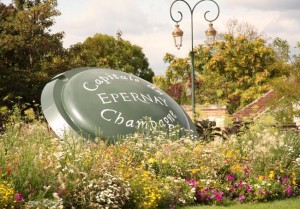 Although Dom Pérignon has been credited as the inventor of champagne, in reality he was only a contributor to the process now associated with bubbly wine. Pérignon was a Benedictine monk who, in 1688, was appointed treasurer at the Abby of Hautvillers, near Epernay. Included in Dom Pérignon’s duties was the management of the cellars and wine making. The bubbles in the wine are a natural process arising from Champagne’s cold climate and short growing season. Of necessity, the grapes are picked late in the year. This doesn’t leave enough time for the yeasts present on the grape skins to convert the sugar in the pressed grape juice into alcohol before the cold winter temperatures put a temporary stop to the fermentation process. With the coming of Spring’s warmer temperatures, the fermentation is again underway, but this time in the bottle. The re-fermentation creates carbon-dioxide which now becomes trapped in the bottle, thereby creating the sparkle. 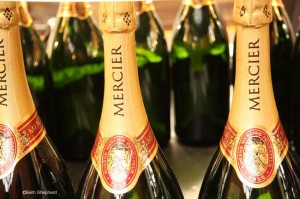 For Dom Pérignon and his contemporaries, sparkling wine was not the desired end product. It was a sign of poor wine making. He spent a great deal of time trying to prevent the bubbles, the unstableness of this “mad wine.” Although he was not able to prevent the bubbles, he did develop the art of blending grape varietals. He also found a method to press the black grapes and yield a white juice, improved clarification techniques to produce a brighter wine than any that had been produced before. To help prevent the exploding bottle problem, he began to use the stronger bottles developed by the English and closing them with Spanish cork instead of the wood and oil-soaked hemp stoppers then in use. Dom Pérignon died in 1715, but in his 47 years as the cellar master at the Abby of Hautvillers, he laid down the basic principles still used in making champagne today. 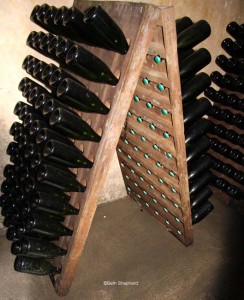 Sparkling champagne was only about 10% of the region’s output in the 18th century. But over the years, it became increasingly popular as the wine of aristocrats and royalty. Its influence in the world of wine continued to grow until, in the 1800’s, the sparkling wine industry was well established.

Big Papa and I chose the ‘Mercier‘ house of champagne and signed ourselves up for their tour which involves riding a laser-guided automatic train through caves 100 feet underground. Mercier was founded in 1858 by a young entrepreneur by the name of Eugene Mercier. He was 20-years-old when he started the Mercier champagne house. Mercier was a forward thinker and believed in the power of advertising. To further his reputation as a world-class champagne maker, he built the world’s largest wine vat for the 1889 World Exhibition; it took 150 oak trees to construct the vat which held the equivalent of 200,000 bottles of champagne. 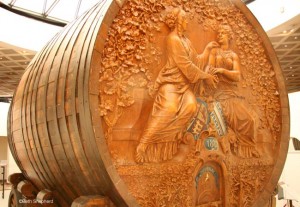 After our Mercier tour we continued up the road to see the castle once owned by the Mercier family. Yes, the castle. I have to admit, it was all a bit surreal. On our way back, we stopped at Castellane and managed to nab two spots on the final tour of the day where we learned a bit more about how champagne is bottled, packed and shipped. 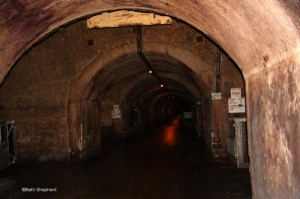 Of course one of the highlights from our day was the several glasses of champagne Big Papa and I enjoyed.  As with all true champagnes, our glasses held a blend of three grapes – Pinot Noir, Chardonnay, and Pinot Meunier. Smooth fine bubbles, a bit of fruit aroma and a touch of toast and apple on the palate.  Delicious!

I must say I was a bit sad to leave lovely Epernay and would have liked to continue tasting our way through the rest of town. But we did buy a small bottle of bubbly to bring home, and have an occasion in mind for when we’ll pop the cork! 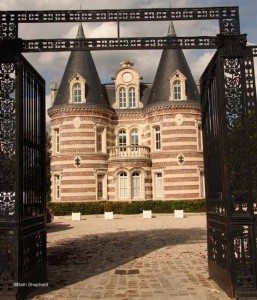 Want more fizz in your day? Check out Wanderfood Wednesday!