Columbine danced in the sunlight, a sea of little fairy flowers all dressed up in brilliant purple. Six-foot tall rye grass swayed in the breeze, fronds making a swishing noise as they brushed against each other. Birds flitted and tweeted with delight through the abundant greenery. Hundreds of bees buzzed and hummed as they made their way to and fro between fields of blooming flowers. Chickens squawked while foraging through berries and beans. In the background a horse neighed and a goat bleated. 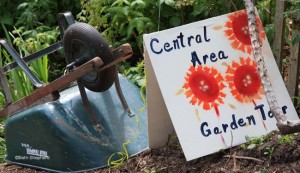 ‘Habitat Alley’ was one of the first stops Big Papa and I made as we meandered from urban garden to urban garden for the 2010 Central Area Garden Tour. Located in Madison Valley, the brainchild of a former REI photographer, Habitat Alley was designed to create a wildlife habitat, beautify a weed-choked alley into a nature path for kids and absorb rain with five deeply dug rain-gardens. In 2005, she got the buy-in from at least a half-dozen neighbors in either direction and then floated the idea by the city to obtain a ‘beautification permit.’ 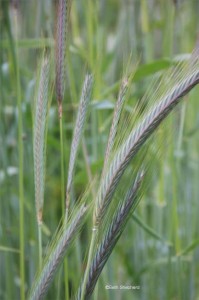 Five years later, native species flourish where weeds once grew. Pacific ninebark, salmonberry, golden current, wild strawberry, Indian plum and western columbine were among the plants happily ensconced along the trail in the back of several homes.

Entering Habitat Alley, I felt like Dorothy, in ‘The Wizard of Oz’ at the moment when she and Toto step from the black and white world of Kansas into the Technicolor world of Ox. All this beauty, that I never knew existed, and only a few miles radius as the crow would fly from the Urban Cabin.

A labor of love indeed, and our host was clearly passionate about her cause. She told us that last year her bees produced 85 pounds of honey. Artichokes, fig trees, blueberry bushes and a diversity of vegetables were tucked into every corner of her yard. A big-boned guard cat sat on the porch keeping watch over his kingdom.

Big Papa and I ventured to twelve gardens on our tour. Each offered something unique. A profusion of double lilacs and a lap pool hidden behind a garden gate, worm bins and huge cisterns creatively tucked against a house that supply rain water to use inside and out.

We were also treated to our fare share of great garden art. One porch was adorned with a six-foot asparagus spear sculpture, which looked real enough that I was tempted to take a bite. A fountain tucked under an old apple tree here and a bird bath in the middle of a garden there. Lovely mosaic stepping stones, fanciful metal trellises and peaceful Buddha statuary found their way into every nook and cranny. 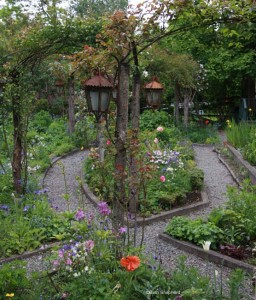 spent the better part of the afternoon with my jaw dropped below my neckline, amazed at the years of dedication a dozen home owners displayed in their urban landscapes. We met wonderful kindred spirits, all doing their bit to bring nature to the city and share it with their neighbors, by installing flora and fauna right outside their front (or back) doors. And, I’m certain the treasures we saw are only the tip of the iceberg.

Later that afternoon, back at the Urban Cabin, I peered out our windows and took stock of the progress being made in our little plot of soil. Garden beds have appeared where bare soil once stood. A robin dives and splashes in the bird bath. Strawberry bushes reveal tiny white flowers slowing turning to fruit. 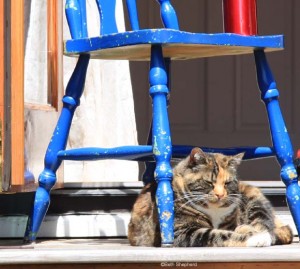 I felt immense pride. Big Papa and I have put in plenty of sweat equity to create our small corner of paradise. Maybe next year we’ll open our gate to let garden revelers share our very own secret garden.