Christmas is more than a month away. Yet while grocery shopping, even several weeks ago, I noticed that nearly every store front is festooned with a holiday theme. I grumbled to myself a bit about the fact that the ‘Christmas’ season seems to begin a bit earlier each year.  When I was a kid, stores wouldn’t dream of displaying their Christmas windows until the day after Thanksgiving. Now, it’s fair game the day after Halloween. 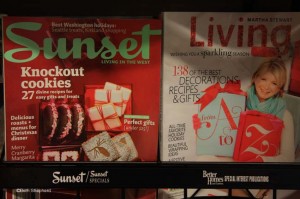 Like most folks, I’ve come to accept that this is just how it is and, after the initial shock wears off, I walk past windows filled with red, green and glitter without giving it a second thought. It’s just part and parcel of “the season” in the States.

When I thought about this, what got stuck in my brain is how little I know about Armenian holidays, even the “major” holidays like Christmas. What we celebrate in the U.S. and how we celebrate is not what is celebrated the world over. I imagine if I was walking down Abovian Street in Yerevan right now, it would bear very little resemblance to the decorated and uber-merchandised streets of Seattle.

In Armenia, Christmas (“surb tsnund “) is observed on January 6, with Christmas Eve on January 5. While those of us in the U.S. are packing up ornaments and putting the well-loved but now dying Christmas tree out in the street, Armenians are attending church and enjoying Christmas dinner. A “traditional” Armenian Christmas dinner is not roast turkey, ham or crown roast. Instead the main dish is fish prepared with butter. Rice with raisins is also popular and the holiday meal is accompanied with red wine.

I’m down with a culturally diverse household. Big Papa and I come from distinctly different religious and cultural backgrounds ourselves.  We’ve already cobbled together a bit of his and a bit of mine. Good friends of ours celebrate “ThankHanuMas,” a holiday combo that suits us to a ‘t’ as well. So, I know I’ll do my best to learn more about Armenian traditions. I want to incorporate our child’s culture into our family’s “holiday blend.”

My friends, who are married and partnered, tell me that some of their first big fights occurred over which holiday traditions to honor. Will they make the oyster stuffing just like her folks make in New Orleans or the wild rice stuffing that his family in New England likes? Should the Christmas tree be decked out in a mixture of colored lights or white lights only? Blinkers or non-blinkers? Tinsel?

I’m crossing my fingers that our kiddo will take pride in the patchwork quilt of yours, mine and ours holiday traditions. He’ll laugh when he tells his friends how, each Christmas, we set off the fire alarm when making Shepherd’s Pie from scratch (with lamb shanks not ground beef). I want him to look forward to growing Scarlett Runner Beans each summer to shell and put in Christmas Eve soup each winter. I hope he’ll revel in the northwest spirit of Santa in a kayak during our walk around Greenlake for the ‘Pathway of Luminarias’ the second Saturday each December.

As far as I’m concerned, the more traditions, the merrier. Life is richer in the mixture.