Big Papa and I are an online dating success story. In his profile he wrote, “Frankly, there’s something really therapeutic about pulling weeds after a long week at work.” When I read that, I thought, “This guy is for me!” I love to garden. Feeling the earth between my fingers is elemental, and watching plants grow and thrive in our yard is one of life’s greatest pleasures.

During summer, the Urban Cabin’s little backyard oasis becomes an edible feast. In the midst of our uber-urban neighborhood, we have two yellow plum trees, flowers that make their way to our salad, tomatoes, zucchini, Scarlett Runner Beans, a plethora of herbs, and even a corn stalk or two. 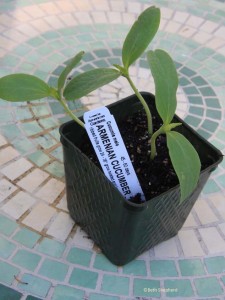 The Armenian Cucumber was introduced from Armenia to Italy back in the 1400s. It is sometimes called snake melon or snake cucumber, because botanically it is a close relative of the honeydew melon, and when it grows, it sometimes curls into a snake-like shape. Armenian Cucumbers are considered hard to find, and are regarded as one of the best slicing cucumbers. The crisp, thin-skinned, and mild-flavored cuke has soft seeds, and grows approximately 30 to 36 inches long, on the ground or on a trellis. It is a “burpless” variety that is easy to digest.

I have already thought of several ways I’ll use our cucumbers. One recipe, called ‘Jajek’ is delicious, spread in a pita bread sandwich or drizzled over kebabs. Jajek uses cucumber, yogurt, garlic and mint. It’s similar to Greek Tzatziki. I’ve seen several variations on recipes for Jakek. This is how I make it:

Combine ingredients in a bowl and chill. Sprinkle with fresh chopped mint before serving.