It’s that time of year again.

Every November, National Geographic puts out a list of their Adventurers of the Year, and this year, the list is as impressive and inspiring as ever. They choose these individuals based on “his or her extraordinary achievement in exploration, adventure sports, conservation, and humanitarianism.”

Booyah is what I have to say to that.

I for one am always inspired by the people that Nat Geo highlights in this annual award ceremony. Last year I wrote about the past award recipients,  including Dave and Amy Freeman and Gregg Treinish. I also can’t help but reflect on the fact that while they chose these certain individuals as worthy of this title, there are so many others out there doing amazingly cool and inspiring work that we never hear about. This award is a reminder to celebrate all those who are adventuring and changing the world with their actions and indomitable spirit. 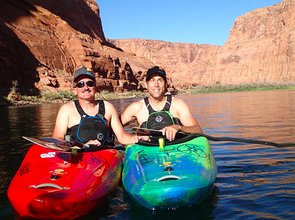 Two favorite Adventurers of the Year are Erik Weihenmayer and Lonnie Bedwell, two blind kayakers who paddled the mighty Colorado river in the Grand Canyon earlier this year. I think it’s the rafter in me, but I get butterflies every time I run those rapids myself, and I can see the rapids. I’m amazed that these two men who didn’t know how to kayak before they lost their sight, decided to take on this epic feat. I’ve been following Erik for a while now, ever since he climbed Mt. Everest in 2001, becoming the first blind man to ever summit the tallest mountain in the world.

Another Adventurer to read about is Kit DesLauriers, a world class ski mountaineer who ascended Mount Chamberlain in Alaska’s Arctic National Wildlife Refuge with a team in the name of science and, well, exploration. The team succeeded in gathering the necessary data which aided in measuring glacier retreat, while also partaking in an incredible expedition to the farthest corners of the earth.

There’s many more Adventurers to read about, and I encourage you to vote for your favorite here.