Home / festivals of India / Celebrating Krishna
« Don’t talk to me of romance baby, lets go walking in the rain |
Main

It’s festival season in India now, all the gods have woken up from their somnolent sleep of summer, the first flush of the monsoon rains have cleared the air and the way now for massive celebrations. In a land of 330 million gods, there is never a day that passes without some kind of festival, from a simple home puja to an extravaganza of gigantic proportions.

Now we are into Super Size Festival season. Today is the birthday of Krishna, an avatar of the creator God Vishnu whose story begins before he was born and continues to this day with the wisdom he imparted on karma still recited today in that divinely holy book of life instruction, the Bhagavad Gita. Krishna was born into your usual dysfunctional family, his jealous and paranoid uncle was a terrorist with a soft heart for his sister. When a disembodied voice predicted that the eighth child of his sisters union would bring and end to the reign of terror of the uncle, he promptly threw his sister in jail and killed every child up until number five when the parents started to get wise. Krishna survived to fulfill his karma, spent his childhood being the cutest kid on the block but with powers that were beyond imagination.

As a youth he dallied with the gopa and fell in love with Radha, a love story that is still told and enacted today. 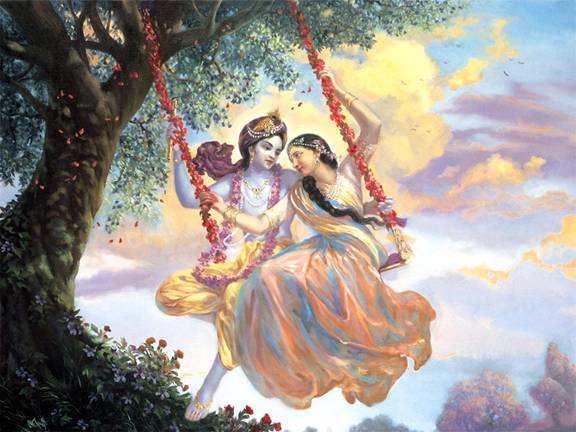 In the Bhagavad Gita he counsels Arjun to go into the battle field and slaughter his family because this in fact was his karma.  His teaching to Arjun to abandon all attachment to the results of action and attain supreme peace.

If we care to take a lesson from the life of Krishna on earth, for me the true essence of Krishna is Bliss and Non Attachment.