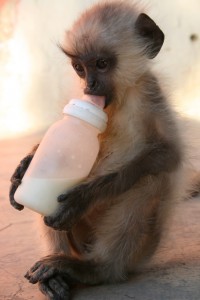 This morning the monkeys arrived on a dawn raid of the jamun tree. The sharp eyed neighbour woman noticed them first (of course she notices everything, she is the self appointed watcher on the hill here) and gave the shout. There is a particular kind of a shout you give to a monkey raid, its intent is to show that you are more aggressive than they and a call to arms. We all rush outside to scan the hills near our houses, rock in hand ready to throw. Despite the heat we clamber up the hill and throw stones and shout and jump around. The dogs join in on the game and chase the monkeys without ever barking, their tongues flapping as if they were part of a secret joke and the monkeys stroll disdainfully on as if we were beggars on a city street they had chosen to ignore.
Still, its good to jump about. Since The Day The Music Died, I haven’t done a lot of dancing alone in my room and the tension of waiting waiting waiting for the rain to come, for the electricity to come, for the bloody flies to GO takes its toll on the body.
For some reason I thought of a lady I used to call Mrs Gisar, who lived nearby the Akhara where I stayed with my Baba ji, the wild and crazy naga sadhu in Omkareshwar. Mrs Gisar would come to the Akhara usually to drag her husband away from sitting around with the sadhus, very rarely did she come on a personal mission. She was a grandmother of a delightful little girl who loved Kailash Puri Baba the kind hearted Mahant, and often came to return the child home if Mr Gisar wouldn’t come. 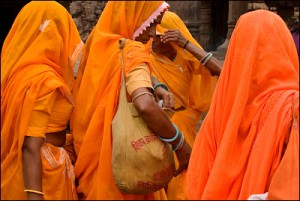 I guess she was not much older than me, but years of physical work and other hardships showed on her wiry frame and exhausted expression.She was a lady of a few short sharp words and not inclined to pointless conversation. She was one of the few women I saw regularly during those days but we weren’t friends. But I saw the inside of that women on two occasions.
Monkeys are always a problem when you live without doors or windows as the Baba’s did, we would constantly be raided by the most vicious band of monkeys. They would enact daring raids by sending the young monkeys into one room there by creating a diversion. While we chased the young monkeys out the older ones would be busy helping themselves to our vegetables and unlokcing cupboard doors to peek inside. They used to hang out in a grove of trees that was between the akhara and the market, swooping down on solo walkers and grabbing their shopping.

One day the monkeys were all over the bloody place, we had chased them from the akhara grounds but they sat in various places on the outside wall and stared at us insolently. Suddenly Mrs Gisar came through the small inner gate, we warned her that she was walking into a barrel load of monkeys and for the second time in all the years I had known her, I saw her eyes light up. She ducked back out the door and returned within minutes with a slingshot in her hand. Tucking her sari a little, she began what I can only describe as a Bhanda Haka. Jumping here and there, she took aim and clucked and challenged the monkeys.

She ran directly at the ones on the ground and made a stance like Mohammed Ali, daring the monkeys to attack her. She took aim with the slingshot and called the monkeys to bring it on, one by one she took on this fearsome troupe and they scattered over the wall at her attack. I was astonished watching her, it was like watching the goddesss dance to the damaru of Shiva! In those few moments, she was Durga Ma riding the lion into battle, her face glowing and her eyes flashing. Ageless, deathless, eternally young.
Then she tucked the slingshot into the waist of her sari and clambered out the gates and flounced down the road with her hips set at such a jaunty angle that I feared for Mr Gisar that night!
Jai Ma! 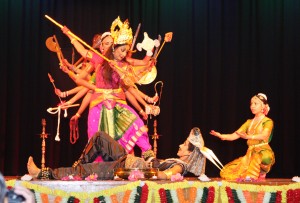