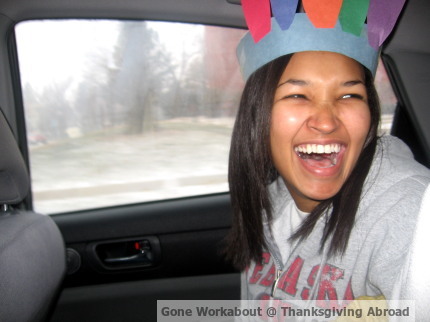 Everyone must bring one friend and one food item. Pilgrim hats optional.

Those were the rules issued to each member of the Vincentian Volunteer Program. Though only five of us actually celebrated the North American holiday, all eleven international volunteers considered it a grand excuse for a party.

Since we were all based out of large cities in the United Kingdom and had traveled to Manchester for this united gathering, some traditional essentials were missing. The green bean casserole contained no French’s French Fried Onions; parents and siblings shared their well wishes via Skype; the morning didn’t start with a Macy’s parade, nor finish with an NFL game. 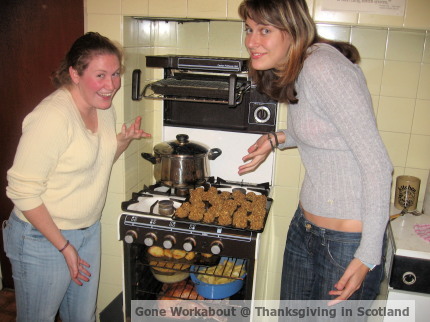 Other foreign elements were added in their stead. A rickety old table with one gamy leg became the centerpiece; tabbouleh replaced mashed yams and tea cakes took over for pumpkin pie; instead of a kitchen full of loud relatives, ours bustled with semi-strangers, close friends and eight different nationalities.

It was the best Thanksgiving ever.

Though nothing resembled the event I grew up with, the spirit of the holiday remained unchanged. We shared our forks and our blessings, appreciating full stomachs and strong relationships. Absent from our families, we found comfort in the presence of others.

Someone even wore a turkey headdress.

Thanksgiving, it turns out, is an emotion we all experience, and nowhere more so than crowded around a broken table, with smiling faces and Arab salad to remind us how lucky we truly are. 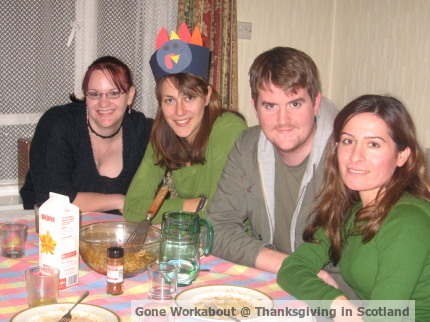 So wherever you celebrate Thanksgiving abroad, I hope these extra ideas help keep the day special: