Home / Expat Living / This week: Where I get sick and eat some blood
« 5 Ways I’m Becoming Thai |
Main
| Khao Soi: Quite possibly my favorite Thai dish »

Last week I had a bit of a cold.  Nothing serious, just some sniffles from teaching all the smiling, sneezing children I see every day.

I wondered, what do you eat in Thailand when you’re sick?  I kept up a steady stream of coconut water, spicy tom yum and plain sticky rice to kick the cold.  I also found out you eat this: 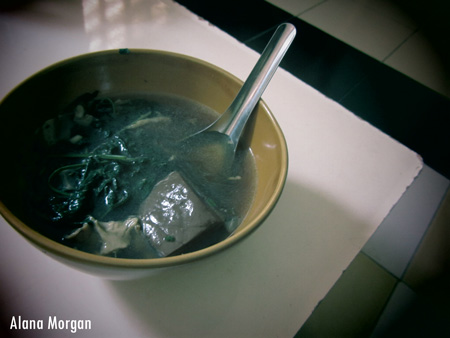 My Thai friend was generous enough to bring me soup – that he made – after I had slept through a lunch date.  (What a guy – I stand him up because I can’t be asked to get out of bed before 12:30 and still get a hot meal and some company.  I don’t know what I did to deserve this.)

Very nice and very tasty.  However, I don’t think I got enough credit for eating it without any qualms, flinches or even raised eyebrows.  Because, in the lovely soup, were large chucks of congealed pork’s blood (along, I think, with a few other things that I decided not to ask about…). 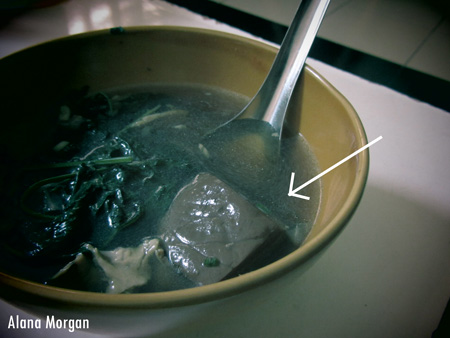 Did I flinch?  No.  Make any ‘you’re-going-to-make-me-eat-what?!’ faces?  No!  I ate it like a champ.  First time eating chucks of animal blood, while not feeling well no less, and handled it like no big deal.  (And kept it down while he explained to me how they made the blood solid like that.)  I don’t think my Thai friend realized that it was kind of a big deal though and for many other Westerners it may have been a hard thing to swallow…none of my friends’ mother’s at home ever gave them blood when they were sick.

Unfortunately, there were no other witnesses to see me lying in bed, sick, willingly eating…blood.  Which is why I felt like I had to share it in a moment of pure self-importance and thinking you care.

Thanks.  I feel better now.