Like I’ve said before, I looooove riding my motorbike and being able to zip through town. It’s by far the best way to get around and one of my absolute favorite things about living here. I’m pretty pleased with the fact that I learned to ride (one of the big things on my life list), purchased my own motorbike and can now maneuver Thai traffic with ease.

When I visited Chiang Mai two years ago I remember riding on the back of a bike taking video of the cars/trucks/people/bikes all weaving in and out of each other. I was in awe of the traffic and how it looked so crazy and unpredictable compared to the States. They didn’t stay in lanes! There were three, four, FIVE people on a bike! Girls road in skirts sitting sideways! No one wore seat belts! They drove the wrong way up the road into oncoming traffic! Or on the sidewalk! CRAZY! 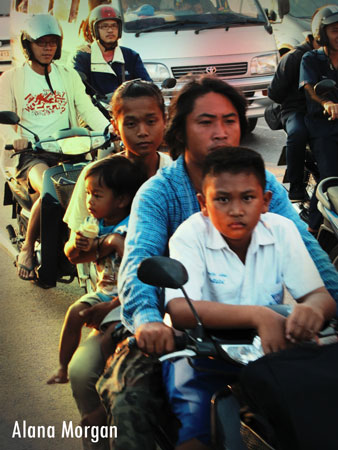 And, at first, it is. But also not really. Just different. I feel safer riding a motorbike here than I would at home. Everyone throughout Southeast Asia rides, and have been since they were born, while at home drivers aren’t as cautious about motorcycles.

There’s a rhythm and flow to the traffic here that we don’t have in the west and it just…works. In fact, I think it can even serve as a metaphor for life (stay with me here).

Driving at home is controlled by rules – as it should be, I’m not advocating a constant free-for-all – rules to keep us “safe” and to be able to anticipate other drivers’ moves. So much so that when someone doesn’t do what they’re supposed or expected to, like failing to use their turn signal, it really throws you off and ticks you off.  Here using your indicator is appreciated, but not necessary. Everyone keeps a close watch on what’s going on in front of them and trusts that the people behind them are doing the same that way everyone’s covered. If you need to make a quick turn, you look then go. If you need to pass someone you drift around them. If you need to go a little ways in one direction but it’s a one-way road, you just stick to the side and slowly go upstream. You need to be very in the moment, but also expect the unexpected, and simply go with the flow, just like you should in life.

It works out, things keep moving, you do what’s necessary to keep you heading in the direction you want to go. Sometimes, someone pulls out right in front of you or there’s an accidental bump and you pause, fix the situation and move on. I’ve only seen one instance of road rage while in Thailand and there’s very little honking, which when you first observe the driving here you expect there to be more. Sometimes you stop or are slowed down by something blocking your way, but then it picks up again.

And, it’s fun!  You feel alive, present, aware (you better be aware), all while enjoying a lovely breeze, except perhaps during rainy season downpours… 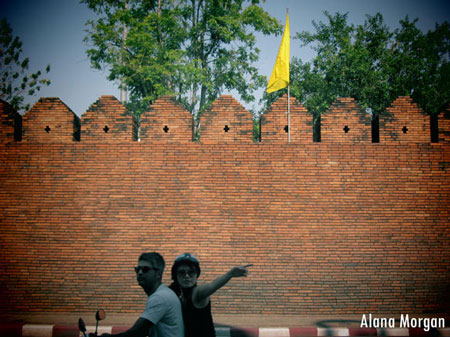