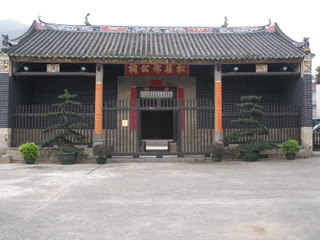 When I used to think of walled villages, I would conjure up romantic visions of places like Montereggiano, a favorite spot in Italy.  Picturesque scenes found in such medieval European fortresses are far from what one sees along Hong Kong’s Lung Yeuk Tau Heritage Trail, which offers visitors a one and a half mile trek featuring  five wais (walled villages) and 6 tsuens (villages).

Unlike the small towns of Spain and Italy, these are not lovely little manicured hamlets but rather an unusual – and sometimes crumbling and rubbish strewn –  mix of contemporary and traditional.  Each one maintains the original, circular layout, but inside you may find traditional old stone homes, often in some stage of disrepair, or contemporary three-story structures complete with TV antennas and all the modern conveniences.  For those who spend time in Hong Kong, this mix of traditional and modern is a must see.

To get there, Erik and I took the train to Fanling, two stops short of the Chinese border.  As we exited the station, we followed the well-marked signs to mini bus 54K.   Thankfully, there were laminated cards posted at the bus shelter with pictures of sights found along the Trail and a note advising tourists to indicate the preferred destination to the driver. As English evaporates once one leaves central Hong Kong, we pointed to a picture of the Tang Chung Ling Ancestral Hall, where I had been told maps and brochures would be available for visitors, and we were on our way. 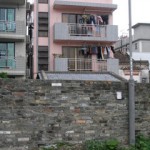 The Tang Chung Ling Hall was built in the 16th century and the center room boasts beautiful “soul tablets” for each village ancestor.  Our brochure explained that the surrounding buildings, as well as the villages along the Lung Yeuk Tau Heritage Trail, were founded by the Tang clan, who came from JiangXi, the same province where Elisa was born.

The Tangs are one of the five clans who settled centuries ago in what’s now Hong Kong’s New Territories.  We also learned from the brochure that the Tangs “have the strongest claim to royal descent among their fellow clansmen for they are descendants of the eldest son of the princess of the Southern Song dynasty (1127 – 1279). When the princess took refuge in the south, she was married to Tang Wai-kap of Kam Tin. The eldest son of the royal couple moved to Lung Yeuk Tau at the end of the Yuan dynasty.”

The neighboring Tin Hau Temple houses two bronze bells, one of which was cast in 1700 and given by villagers as an offering to Goddess of the Sea in hopes that she would protect the young Tang men during their journey to the city to take the provincial examinations.

We spent another couple of hours wandering through the wais and tsuens, which are now tucked among a mix of new and old – as well as modest and affluent – communities. Contrary to expectations, each village was unique and offered something a little bit different from its neighbors. While none of the small hamlets we encountered were charming in the conventional sense, they were fascinating to explore. Unlike many walled villages in Europe which have become tourist traps for the wealthy, these towns were still very much alive.

Highlights of our walk included village gates, which for the most part were well-preserved and festooned with lively decorations (we were there around New Year’s). The most memorable village was San 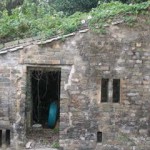 Wai, originally surrounded by a moat, and built in 1744.  It remained in excellent condition with four intact watch towers.  The Sin Shut Study Hall was also a stand out with its beautiful – albeit crumbling – friezes depicting an earlier life. Built in 1840 to commemorate and worship Tang Wai-kai, a 19th generation Tang ancestor, today it is closed to the public.

It is rare in Hong Kong to get a peek into the area’s past.  For those seeking an off-the-beaten-path experience, this trail offers a unique window to another time, while highlighting an unusual blend of old and new in the context of the area’s walled village history.