The US withdrew from Vietnam over thirty years ago, and yet, for those who were alive at the time – even as children – the memory lingers. I was a young girl during the War, but I vividly recall visiting my uncle, who returned physically well but not so mentally, and another relative, who had been injured when the North Vietnamese shot down his helicopter. He lay – unrecognizable – in a full body cast for several months. And then there were the names – Khe Sahn, Hue, and Danang – which punctuated my young imagination with feelings of mystery, intrigue, and dread.

This is my second trip to Vietnam, but as with the first, my initial thoughts upon landing were of the American soldiers who came here so many years ago. When disembarking from the plane, my senses were assaulted by 100 degree heat -and humidity to match – together with smells common in Southeast Asia but strange and exotic to newcomers. I wondered what it must have felt like as a young GI to arrive in a land that could not have felt more foreign.

Even with a limited personal experience with the War, one is faced with its consequences at some point during a trip to Vietnam. We took a day trip to the My Son Sanctuary, a unique, Indian-influenced, sacred Hindu temple complex built by the Champa people, who ruled the Central part of the country from the second to the fifteen centuries. The area originally boasted seventy stone towers; twenty remain. During the Vietnam War (or what is known here as the American War), US military command believed that the site housed a North Vietnamese base and very nearly bombed it to oblivion. But My Son survived, and despite its dismal condition, it is worth the hour’s drive to see it.

The area is lovely, set against the verdant hills of Central Vietnam, and the vast territory covered by temple ruins reflects the glory of the Champa people. By the 10th century, they were the most formidable power in Southeast Asia, and their biggest trading partner was India. The origins of their spiritualism were India-based, and the Champas built My Son in honor of the Hindu god, Shiva, crafting each tower of sandstone bricks and a mixture of sand and water. Our guide told us that once a tower was completed, the Champas burned it to harden the sand and water mortar into stone (our guidebook was less definitive about the building process).

A small outdoor museum houses some carvings of Hindu gods and displays two U.S. missile casings, the first found on the premises in 1988 and the second in 2007. Our guide also pointed out several overgrown bomb craters measuring about 8 meters across and 4 deep. There is a whole industry around visiting former war zones, and our guide told us there were still a number of US veterans who visit each year for this purpose (not surprising given the number of people still visiting WWII sites and Civil War battlefields).

While viewing some ruins, I began a question to our guide with, “When America bombed…” He interrupted me, “We never say, ‘America bombed Vietnam,’ we always say, ‘the US military bombed…'” I stood corrected, and later, my impression of My Son changed. I had initially viewed it as a glimpse of the country’s war torn past, but wandering the expansive grounds, which accommodate up to 2,000 visitors a day, I came to see it more as a monument to Vietnam’s ability to survive – and thrive.

Here are some photos including one of the best preserved towers, scuptures, bomb casings, and an old US Army Jeep used to convey people to the temple site. 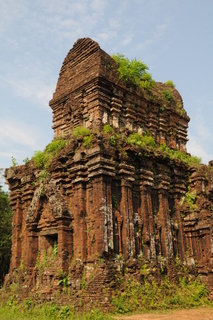 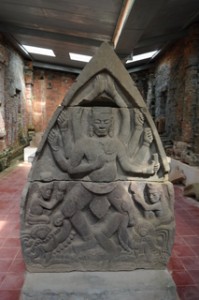 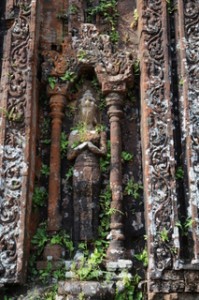 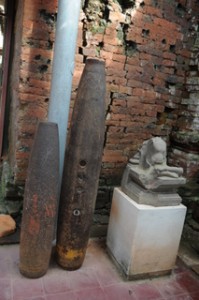 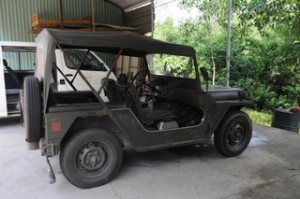