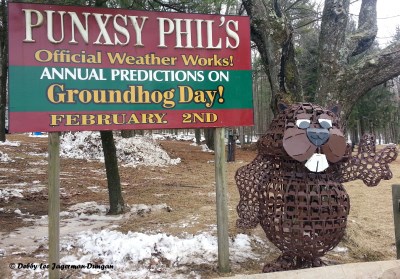 This is my one (long) sentence reliving my early morning hours in Punxsutawney on Groundhog’s day:

On this Second day of February, 2014, aka My Birthday, aka Groundhog’s Day, the World’s Most Famous Weatherman, the Weather Predictor Extraordinaire, the most photographed Pennsylvanian, the King of the Groundhogs, Punxsutawney Phil, the Seer of Seers, the Sage of Sages, the Prognosticator of Prognosticators, live from Gobbler’s Knob in Punxsutawney, PA, the Weather Capital of the World, the “Town of the “Ponkies,” also known as gnats or sand flies of Native language, an old coal mining and railroad town of the 1800’s, 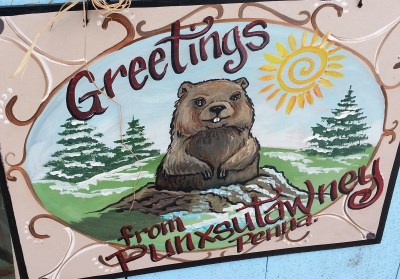 on the day exactly half way between the Winter Solstice and the Spring Equinox, based on the European custom, brought over by Germans immigrants to Pennsylvania, predicting the length of winter by weather conditions on Candlemas, which is an ancient Christian festival, combined with the legend of the “Wojak,” a name carried over from the original settlers the Delaware Indians that means “woodchuck,” another name for the groundhog, just like marmot is another name, and also called the hedgehog in Germany, where the “Wojak” spreads his wisdom into the future, 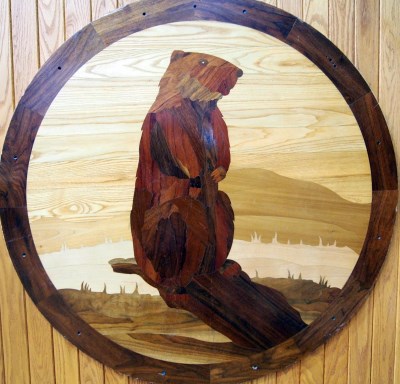 in front of a crowd of thousands and thousands of his Faithful Followers, some who gather at 3:00 in the morning, but us with only two hours of sleep having awoken at 2:30 in the morning, driving from our Bed and Breakfast in Indiana, PA, and after parking the car, walking the mile and a half up to Gobbler’s Knob, in the dark, with our headlamps, as bus after bus filled with thousands of others passed us by, and us arriving at 5:00 in the morning, with today’s weather being of a light drizzle rain and around 35 degrees, but much warmer than the Arctic blast of days earlier, bundled in several warm layers and rain gear and waterproof boots, some adorned with umbrellas, 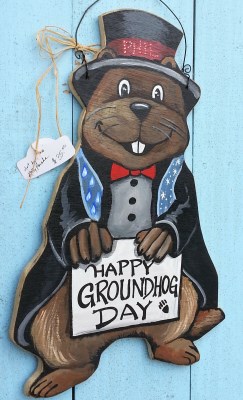 being entertained by a stage of dancers and singers, when at 6:30 in the morning, the lights were shut off, and fireworks began to light the sky, along with the oohs and aahs of the crowd, when finally the 15 members of the Inner Circle, a group of local dignitaries responsible for carrying out the tradition of Groundhog Day year after year since 1886, as well as responsible for feeding and the care of Punxsutawney Phil, wearing black tuxedos and top hats, a tradition that began in the 1950’s as a sign of respect for a VIP such as Phil, 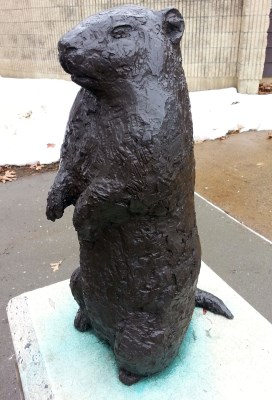 along with the famous Punxsutawney Phil, made their trek to the stage at Gobbler’s Knob, where the President of the Inner Circle, used his Acacia Wood Cane, passed down from generation to generation since 1887, because whoever possesses it can interpret Groundhogese, which is the sounds, postures, and body language Phil uses to convey his prediction, used to tap Phil’s burrow three times to awaken him, where Phil decided to dig himself a bit deeper in his straw, and with a moment of everyone waiting for Phil to be taken out and emerge from his burrow, 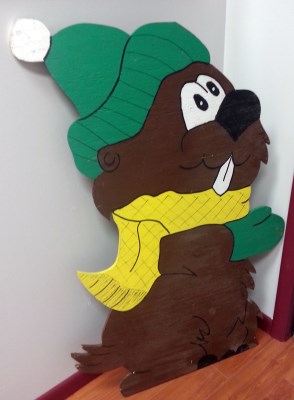 when finally the Seer of Seers, the Prognosticator of Prognosticators, was revealed to the cheering crowd at 7:28 in the morning, made his prognostication, in this 128th year of doing so, and made his prediction of weather for the next six weeks, as interpreted by the President of the Inner Circle, from a translation of Groundhogese, with the Vice President of the Inner Circle reading the following proclamation, which made reference to the Super Bowl that was to occur on the same day, with everyone hoping that Phil would not see his shadow, and we would have an early spring, but alas based on the fact that Phil saw his shadow, the prognostication is six more weeks of winter…

A Super Bowl winner, I will not predict,
But my weather forecast, you cannot contradict,
Why that’s not a football, but my shadow I see,
It’s six more weeks of winter, it must be,

…as the crowd then booed at the prediction of six more weeks of winter, but I was so excited and happy to have witnessed this on this Second day of February, 2014, aka My Birthday, aka Groundhog’s Day.

Note that while I took all the pictures for this blog, I would like to give tribute to all the artists who created all these fun and wonderful images of Punxsutawney Phil. While I unfortunately don’t have the artists’ names, these photos were taken at various locations throughout Punxsutawney, such as the sign and metal sculpture at Gobbler’s Knob, two from an arts and crafts display, the wood carving at the Weather Center, the small sculpture which actually I do know Jimilu Mason presented on July 9, 1977 which is in Barclay Square, and the one with the warm hat, gloves, and scarf at the Groundhog Club Headquarters.

For more information on visiting Punxsutawney, visit groundhog.org and punxsutawney.com.