“As the waves of the ocean wash scallop shells on the shores of Galicia, God’s hand guided the Pilgrims to Santiago.” 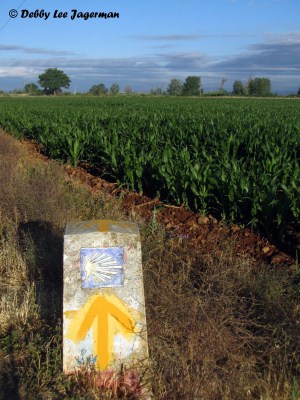 I met people from all over this world as I walked along the Camino de Santiago. From just about every continent. I met people that live near where I live, in Seattle, and from across the country of the United States, from Colorado to Maryland. On another continent, I met people from Argentina. In Europe, I met people from Germany, Luxembourg, Italy, Ireland, and of course Spain. People from South Africa, New Zealand, Australia. Korea and Japan, too. And many more. All of these pilgrims walking the same Camino as I, all for one reason or another, and all headed towards the same destination…the Cathedral in Santiago de Compostela, the tomb of Saint James. 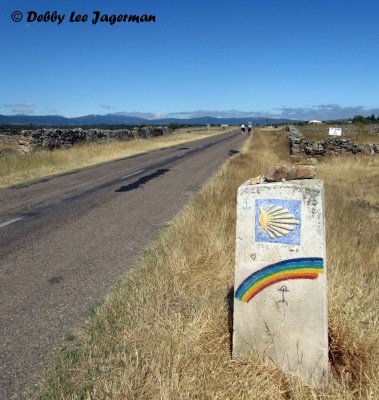 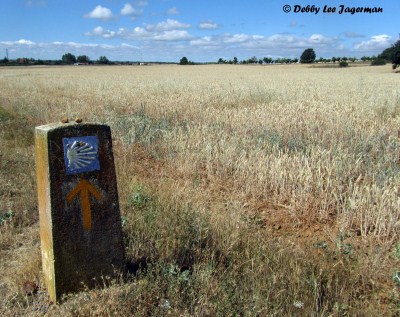 The possible origin that the scallop shell is used by pilgrims today is that the shell is common along the Atlantic coastline of Galicia, the community consisting of four provinces in northwestern Spain. After pilgrims walk to Santiago de Compostela, the capital of Galicia, many continue on to this coastline. I saw some beautiful scallop shells myself on the beaches of Cee and Finisterre, two towns located on this Galician coastline. And while I left the shells there, and only took pictures, perhaps the significance began as pilgrims of long ago would collect the shells as “souvenirs” of their journey.

There are also a couple of myths about the scallop shell and Saint James, Jesus’ apostle whose remains pilgrims walk hundreds and hundreds of miles to pay respects to, that contribute to significance of the scallop shell symbol of the Camino.

In addition, shaped like a cup for drinking water, or a bowl for eating out of, the scallop shell was also used by pilgrims of long ago for these functional purposes. “The pilgrim carried a scallop shell with him, and would present himself at churches, castles, abbeys etc., where he could expect to be given as much sustenance as he could pick up with one scoop. Probably he would be given oats, barley, and perhaps beer or wine.” 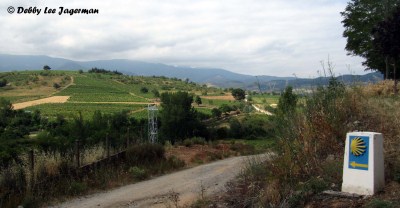 Today’s pilgrim, including myself, wears the scallop shell, usually hanging from our backpack, to symbolize that we are pilgrims. Some pilgrims attach the shell to a walking stick, and others wear a necklace containing a small scallop shell. They can also be attached to hats or clothes.

The scallop shell as a directional marker along the Camino comes in many variations. They are everywhere, and often, in all kinds of colors and artistic interpretations. The most common is the cement marker about 3 feet high, which contains a range of colorful scallop shells. As you can see from photos in this blog, many of these cement markers also include the yellow arrow. People would even paint rainbows and hearts on the markers, or write “Buen Camino” and other words of wisdom near the scallop shells. 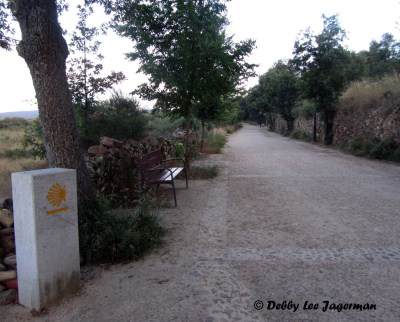 I took a multitude of photos of the scallop shell during my journey along the Camino. While this blog contains only a few, please stay with me as I post a few more blogs about the scallop shell. You will be seeing more of the cement markers with their range of colors, plus tiles and mosaics containing the scallop shell, wooden signs, street signs, shells from the Galician coastline, yellow arrows made of shells (my favorite), food (yes, even chocolate), and more.

As people from all over the world converge towards Santiago de Compostela, the scallop shell guides them to their destination. 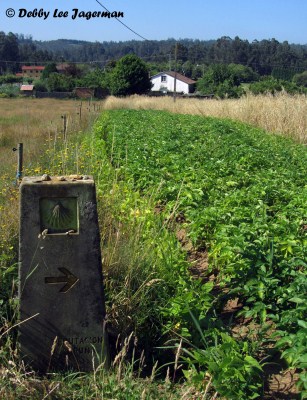 Contemplative Thought from the Camino: As I walked my pilgrimage, I thought of other items whose shapes are similar to the scallop shell: Handheld folding fans. The fingers of the hand, leading to the palm.

Packing Tip for the Pilgrimage: While I did not use my scallop shell to drink water, I did use a very convenient water bladder. This one was light weight, easy to fill, and carried enough water to get me to the next fountain, or other place where I could fill it. And no, I did not use it for beer or wine.

Quotes in this blog are from the following sources. In addition, for more information on the myths surrounding the scallop shell and Saint James, please read these sources.