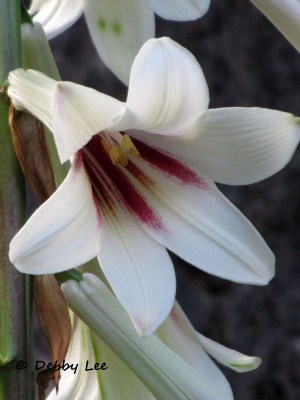 Native to the Himalayas, the Giant Himalayan Lily, also known as ‘Cardiocrinum Giganteum’, is quite a unique flower. It starts out as just a large clump of glossy, leathery, heart-shaped, green leaves, which only get a couple of feet tall. It stays this way for an average of five to seven years (yes, five to seven years), from seed until the bulb matures. 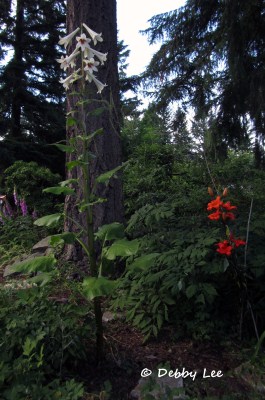 Then in the middle of a summer after all these years, a tall shoot emerges from this clump of leaves carrying narrow jade-green flower buds. This shoot grows to be an average of ten feet (yes, ten feet) tall, making the Giant Himalayan Lily the largest species of any of the lily plants, and thus appropriately named. 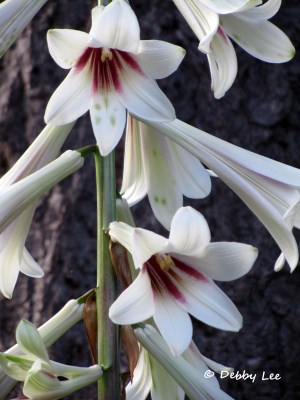 The flower buds start to open one after another, from the bottom of the shoot on upwards, displaying fragrant flowers that are large, white, and trumpet-shaped, with a touch of burgundy in the middle. As many as twenty (yes, twenty) of these trumpets can bloom at one time on the shoot.

The Giant Himalayan Lily is considered a woodland plant, one that grows best in moist and shaded settings, with rich soil, and protected from the wind. And because it is native to the Himalayas, it grows at high elevations, thousands of feet above sea level. 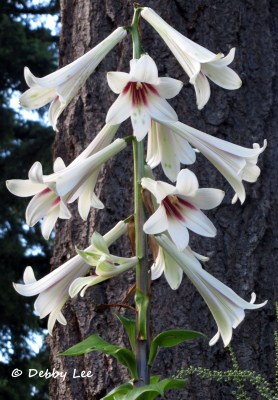 However, it also grows at lower elevations. In fact, in honor of my upcoming travels to Bhutan, a few weeks ago my neighbor’s Giant Himalayan Lily decided to bloom this year! John and Kay have had this plant for four years before it flowered (slightly less than the average because they got their plant in a pot), and the shoot was about eight feet tall. And the flowers were beautiful!! And, we only live at 675 feet elevation, just outside of Seattle. 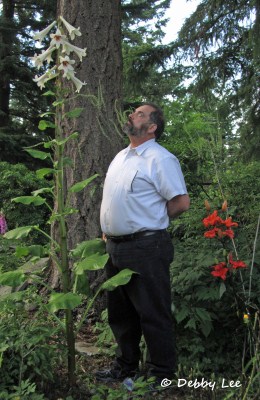 I am taking this as a very good sign for my Bhutan travels that my neighbor’s Giant Himalayan Lily bloomed this year!