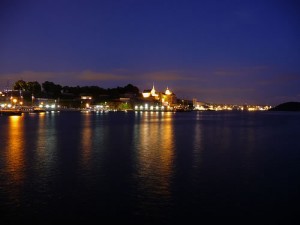 I have to admit that I’m a little sheepish about saying this too much, lest it be interpreted that I’m gloating. But the fact is that I’m leaving for Oslo, Norway next week and will be attending the Nobel Peace Prize ceremony.

I actually didn’t try to make it happen. I wasn’t out petitioning for this. And never in my wildest dreams would I have thought of attending, so it was never on my “list.” But by some amazing luck of the draw, I received an interesting call the day before my birthday. Much of the conversation was a blur, but the bottom line was that a concert producer had received my name from someone (THANK YOU whoever you are), checked me out, and invited me to Norway.

For my hosts, the tourism board in Hamar, the Peace Prize Ceremony is secondary to a larger picture. They would like coverage of the Hedmark region of Norway and, of course, some publicity for the concert, A Christmas Concert from Norway (on PBS this holiday season). But initially all I had stuck in my head was Peace Prize, Peace Prize, Peace Prize. (And you might not be reading this post if the title was “Packing for Hedmark.”)

But now that I’ve done a bit of research, I’m thoroughly excited about every part of this trip, as short as it is (4 days in-country). And I’m determined to get my sleep on the 7.5 hour flight from Seattle to Reykjavik, Iceland before flying into Oslo, so that I can maximize my waking time while there.

So now me, the one carry-on-bag packer, is trying to figure out how to pack for one degree weather, not only for touring the city of Oslo and the Hedmark countryside, but also for attending the Peace Prize ceremony and two church-held concerts. And even though the trip is quite short, I’m not feeling too confident about my philosophy of refusing to check a bag. I just might have to on this one.

So, what WILL be in my bag?

My fancy clothes – I’ll be packing a black dress as well as a top and long black skirt. Given the weather, I’ll also bring my ARA Ohio boots as well as my ARA Paris boots. Both are waterproof and the Paris boots are made of Gore-tex.

Touring clothes – I don’t anticipate having to wear anything special on touring days other than a half ton of layers! I’ll have to go get myself some silk long underwear (sheesh that stuff is expensive!) but I think my jeans, sweaters and long coat will do me well.

Electronics – Of course, my bag is also going to be weighed down with camera equipment (my small digital, an SLR and a video camera). And I’ll have a laptop and a Kindle.

I also plan to bring my brand-smacking new copy of the DK Eyewitness guide to Norway. I chose this over other guidebooks because it is so visually stunning. I also didn’t need a guide with a lot of details because of my short time there and this is great for offering snapshots of the country.

Will this all fit in my Briggs & Riley Baseline carry-on bag? I’ll have to let you know next week 🙂

In the meantime, if you’d like to know more about A Christmas Concert from Norway, which is hosted by Princess Martha Louise and airing on PBS stations over the holidays, you can watch this video…